Obesity Rates in Canada -
Which is the Fattest Province?

To sum up the North American diet is high calorie foods full of salt and sugar with low nutrition leaving us hungry for more.  The food is often embraced because it’s easily accessible, affordable and most importantly tastes great.  Not to mention often addictive.  Mix this in with our increasing sedentary lifestyle (how many of us sit in front of a computer for a living?), this is a recipe for disaster.

Want proof?  Read The China Study and watch one of my favourite documentaries called Fork Over Knives.  I guarantee they’re life changers.

A study from the University of British Columbia (UBC) to be published in the Canadian Journal of Public Health reveals that the obesity rates have climbed to a historic high since 2002.  Obesity has been linked to chronic illnesses such as strokes, diabetes and even cancer. 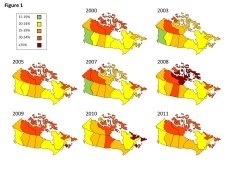 How did the Provinces Fare in the Study?

My native province of Ontario went from 24% to 29%.  In Quebec, where I currently live, fared a lot better staying stable at below 24%.  No surprised here that British Columbia is the healthiest province but wasn’t spared an increase.  BC went from less than 19% to almost 25%.

The Atlantic provinces and two territories (Nunavut and the Northwest Territories) are considered the “fattest” by exceeding to 30%, and some even exceed over 35%.

But it isn’t all bad news…

Good News about the Obesity Rates in Canada

The study has revealed that the majority increase of obesity happened between 2000-2007.  The good news is that is has since stabled between 2008-2011.  I believe this is the result of more food-awareness and investment in more activity lifestyles.

Back to SMART GOALS FOR SUCCESS homepage.

Don't be too quick to get offended! The views on this website are soley those of the author and not necessarily those of any past or current employers. Copyright © 2009 - 2013 smart-goals-for-success.com


Don't be too quick to get offended! The views on this website are soley those of the author and not necessarily those of any past or current employers. Copyright © 2009 - 2013 smart-goals-for-success.com